I’ve mentioned before that the Synergy app is awesome. 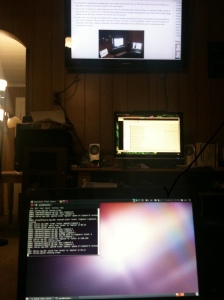 The image to the right is a configuration at my friend’s house where my laptop (bottom) is controlling his dual-monitor computer setup (one regular monitor and an HD TV on top).

It works great as a remote and, yes, you can watch Hulu on it without being charged for watching Hulu on a TV device.

There are a lot of new internet TV solutions, but with just a little bit of extra work a very easy-to-control TV setup works that’s far more flexible than what’s on the market today.

That being said, I do own an Apple TV and what’s nice about these types of devices is that they are small and focus on a simple user interface to get access to content.

I just had the urge to sit down without my laptop and check out something on the net.  And I thought, “it would be nice to browse in a space larger than a smart phone.”  I didn’t want to code, type much on a keyboard+play with a mouse, or sit upright staring at my laptop.

It does seem like the iPad has gotten an unnecessarily bad reputation given that it’s exploring a rather different space of human-computer interaction than your usual PC or smart phone.  I was actually less interested in the MacBook Air, which seemed like a slicker, lighter-weight computer that I would feel less inclined to run my code on because it’s significantly slower than my current 13” MacBook (which I payed much less for).

But the notion of a tablet that I use solely for internet and communication + some additional bonus stuff sounds not-so-bad.  I’m tempted to get one just to see how much I would use it.  I did this with a NetBook. I figured, being a computer-geek, that $250 is worth seeing whether the thing improves my life.  It turns out I didn’t really find a NetBook that handy.  Part of why I feel I didn’t benefit much from the NetBook is similar to the reason I wasn’t interested in the MacBook Air — it’s still a computer that I open up, type on, and use a mouse — so the weight/slickness benefit doesn’t outweigh the sacrifice in performance compared to my current laptop. The iPad seems to have some benefits over an e-Book reader in the sense that it allows a more interactive experience with the display that can show web pages like you would see them on your laptop.   This, in combination with the fact that I lose the keyboard and mouse, might be enough to make it a useful secondary computing device.

This is a sort-of half-baked notion that may have some flame war started somewhere on the net, but I can’t resist.

The combination of a noble call for better Wikipedia articles in a specific subject with a recent example of someone blogging to correct his own entry makes me fantasize: what if individuals wrote blog-like entries that were, in effect, articles like those on Wikipedia?

Why not just create an HTML page or contribute to Wikipedia?  As far as contributing to Wikipedia, don’t get me wrong: I think that’s great. But as outlined in linked “noble call”, there are some legitimate issues–most notably that of authorship.  Blogging allows one to retain authorship and control but, unlike HTML, it facilitates commenting and allows RSSee updates to interested readers and contributors.

In the second link, the creator of Bittorent is correcting his own Wikipedia entry. This makes sense at some level for the sake of clarification and posterity.  There’s no guarantee that if he edits his own entry (say anonymously), the changes will persist, and it may not be appealing to constantly keep watch of minor changes to articles either.

In the days of web one point yore (say before Wikipedia and Wolfram’s Math/Physics pages), if I Googled “Maxwell’s equations”, any page put up by some schmuck like me would probably be dicey at best.  But now, I can just feel lucky and get some pretty decent information from Wikipedia.

But due to the number of people editing the entry, there is a certain lack of authorship and potentially unwillingness to even contribute in the first place.

These days, we see lots of academic bloggers posting their lecture notes on specific topics online (some even making the lecture notes themselves posts rather than linking to PDFs), so parts of me feel like we’re already seeing this kind of behavior, though lectures tend to be less encyclopedic.

The thing I like about this approach is that it’s decentralized and personable in the sense that we can use the fact that we trust/value certain people’s discourse more than others to our advantage.  Potential downsides: (1) we’re that much more reliant on a YourFavoriteArticleRank algorithm to rank the articles for us (for example, when you link to another article, do you link to your favorite one? the top-ranked one? eh hem, Wikipedia?), (2) more people/groups would need to get blogs, and (3) the notion of a “collaborative article” is substituted with a “first author” (the writer of the post) and “contributers” (commenters).  But those concerns don’t seem that dire.

Many text editors have a “block” or “column” mode where items can be copied, pasted, and edited vertically rather than horizontally.  I’ve never come across an editor (or something like a Vi mod) that allows actual column-based editing.   This implies no scrolling up or down.  When you reach the bottom of the screen you go back to the top like a two-column paper.  This would imply scrolling left or right.   This mode would seem somewhat natural for a variety of reasons: it’s often easier to read lines of code and sentences when there is a more limited width (and this can also be more space-efficient for wider screens): 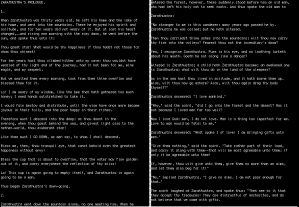 Assuming no explicit line-breaks within textual paragraphs and code that can fit within the column limits, I wonder if there are some other major issues with this…